It began with a text message. I didn’t hear the message come in at 5:06pm on April 2, 2018 but noticed the red light flashing which usually means email spam. I checked the phone around 5:20 and found this message from a friend: “Hey Dee, just sent you urgent FB msg about a Sun conure at wake county animal shelter.” I immediately logged in to Facebook and found the details, along with a picture that chilled my blood.

“I don’t know if you or Phoenix Landings have any contacts with Wake County Animal shelter but this Sun Conure was just posted to the rescue partners.” Then this picture: 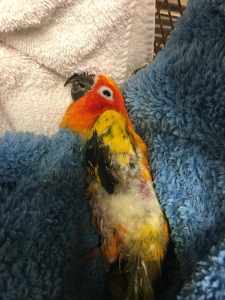 Phoenix, shortly after she was found, while at the Wake County Animal Center.

Along with the picture she copied the shelter’s post: “Urgent! Need to get this beautiful bird out and to vet ASAP! Leg was wrapped in plastic and needs to be amputated. Conure 173805.” My friend added: “you can contact Cindy Lynch” (and gave a phone number) along with “They will only release the bird to a 501c3.”

Looking at the picture, I wasn’t sure if “ASAP” was going to be soon enough.

Without hesitating, I grabbed my phone and called the number she sent me, and spoke to Cindy Lynch, the rescue coordinator at the shelter. She told me to bring a copy of our Letter of Determination and she would register us as a rescue partner. Brian was upstairs so I hit the intercom and told him to grab the copy of the letter off the printer and hurry – we had an emergency.

Though the shelter was closed, Cindy was willing to wait for us. Meanwhile, I called Avian and Exotic Animal Care and told them what was going on, and that I hadn’t seen the bird but the message I had received on Facebook stated that the bird would need an amputation. Dr. Dan Johnson agreed to wait for us to get there.

We got to the shelter and after the paperwork was finished, I followed Cindy back to pick up “Skittles” (the shelter name given to the bird on intake). Her real name would remain a mystery – as would the details of what happened to her. We were told that she was found by a landscaping crew laying under some bushes. They called the county animal control office and an officer was sent to pick up the bird. “Skittles” was on “stray hold” which meant we would be technically “fostering” her for the shelter until the hold was up, in case a family showed up looking for her.

Upon first assessment, she was hanging by one foot and her beak on the side of the cage. What was left of her mangled right leg dangled by a bit of flesh, mostly detached just below her “knee.” It was swollen to the size of a large grape, black and covered in dried feces. At the time I had no way of knowing if it was a tumor, or something caught around the leg. I just knew it needed to be removed. 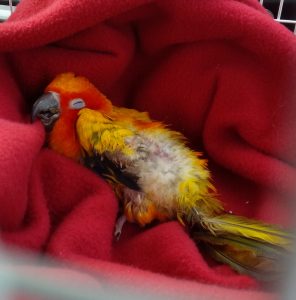 Phoenix, then known as “Skittles,” on her way to see our vets at Avian and Exotic Animal Care.

Brian drove as quickly as possible, with me holding the carrier containing this precious little one. Each bump in the road would elicit a pained cry. Fresh blood was oozing from the wound. She looked weak and very tired. I prayed that God would help her and let her live.

There was no plastic, or as diagnosed by another vet who saw her before her trip to the Wake County Shelter and didn’t help her, no string. It was simply black, necrotic flesh. What had happened to this little bird? One thing was certain. She didn’t fly away from her owners as she had no feathers. She didn’t walk, as her leg was incapable of carrying her. She had wounds to her chest area and the other leg. It was evident she’d been attacked by something – but what? We will never know the full story but whatever she endured, it must have been a terrible, painful, and frightening ordeal.

When we arrived at the vet’s office we were immediately escorted in through the back, and Dr. Johnson – with the help of Dr. Victoria Bender, who had also remained at the clinic – made the decision to cut through the tiny bit of flesh holding the mangled portion to Skittles’ leg. He then cleaned and dressed the leg. She was given an antibiotic, fluids and a feeding via tube. An appointment was made to drop her off the next day during clinic hours, for follow-up and further assessment.

What followed was a relationship with this fragile little girl that would forever entwine her in my heart.

Follow-up care meant antibiotics, pain medications and lots of love. Finding out what happened became a bit of an obsession. I sought information on where she was found, and canvassed the areas, looking for clues, talking to residents, trying to piece together the puzzle of what had happened.

Despite whatever horrific ordeal precipitated her arrival at Marden’s Ark, Phoenix, as she was later named by popular vote, had a sweet disposition. With her physical limitations, she needed constant care. She had neurological issues, to complicate the lack of feathers and her amputation. Despite all this, she was a little fighter. She loved to be held and snuggled. She initially did very well, ate well and gained weight, but then…

One day in May, she had a seizure. Normally calm and nonplussed by medical emergencies, I fell apart but managed to rush her to the vet. Multiple tests were done, and we tried in vain to find and treat whatever was causing the seizures. She began aquapuncture (acupuncture done with injections) which helped immensely with her neurological symptoms.

She battled the odds until nearly the end of June, but on June 21, she took a serious turn for the worse. She was seen by her vet and hospitalized, but we made the decision to take her home for overnight care. Just before 8pm, she began acting distressed. I knew what was coming and I held her close as she breathed her last. A necropsy would later show “Severe bacterial infection of the koilin layer of the gizzard.” The theory being that one of her partially healed wounds had hidden a deep puncture that introduced bacteria deep into the tissues. Whatever it was, it took her young life. The necropsy showed her ovary was not yet active, so she was basically still a baby. My heart was, and still is, broken.