Buyer Beware – for the sake of your birds

(Author’s note: This blog entry was originally published on March 20, 2017 on our standalone WordPress blog at avianrefuge.wordpress.com – link here – however since launching our new website, we have integrated blogging into the site itself and will no longer be updating the blog at avianrefuge.wordpress.com. We will be porting some of the articles over to this blog on our new website, as time allows.)

In the world of social media you are bombarded by information from many sources. A wise friend once told me in a tone of absolute sarcasm: “On the Internet, everyone is an expert. Just ask them.” How is a person seeking answers supposed to sort through it all to find true, accurate information? One of the best rules to follow first, when sifting through information: consider the source.

In the early days of my years in college, we neophytes were duly cautioned about gleaning information from the Internet when doing research for our papers. Of course, Wikipedia was absolutely verboten. As one professor said, “Anyone can put anything on Wikipedia whether it’s true, accurate, or not.” But there were other caveats offered. The most important one was always “Consider the source.” Unreliable sources were discounted as much as if you hadn’t provided a source at all.

What are we considering? First – does the source have an agenda? Do they have some underlying motivation to twist, distort, spin or hide the truth? Do they have something to gain by presenting “information” that casts them, or a product or service they offer, in a favorable light? Then always be suspect. For example, if you are looking for information on a particular remedy, you don’t go to the manufacturer’s website expecting unbiased information. Secondly, does the source appear to conduct themselves in an ethical or an unethical manner? Have you heard other customers complain about unethical behavior? Things like making false claims, or bait-and-switch (when they advertise or show pictures of a superior product but are delivering something other than what they are showing or describing).

On the other hand, just because someone is selling something does not necessarily make them unethical. We work with many vendors who are honest and ethical and value customer satisfaction as well as the health and safety of your bird. But we’ve also found several who absolutely are not ethical nor trustworthy. When you catch someone lying to you or engaging in shady business practices such as “bait-and-switch,” then nothing they say can be trusted and especially if what they are saying directly benefits them.

Here is a good example. We once purchased a supplement containing a ‘natural’ ingredient, Pau d’Arco, that was touted on the product’s listing as having “no known adverse effects or toxicity.” This information came directly from the page where this item was being sold by a third party “bird store” website and was mirrored from the manufacturers own website. After buying the product, we consulted with our veterinarian – who is also a certified veterinary herbalist. She recommended AGAINST this particular product because it can interfere with blood clotting ability, which can cause hemorrhage. We contacted the manufacturer, who initially ignored our email, which was then copied verbatim into a second email and resent. They then claimed they got the first email but had no way to respond — even though it came through exactly the same email account and they were easily able to respond to the second email. I explained what we’d found about the product and suggested that they remove the wording “no known adverse effects” from their site as risk of uncontrollable bleeding IS a significant adverse effect – one that can prove DEADLY. I understand adverse effects very well. I got straight A’s in pharmacology. 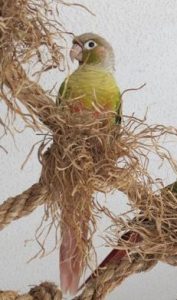 Adorable conure picture for attention! Who wouldn’t trust a face like this?

I’m a registered nurse, and currently studying to become a certified master herbalist. I can tell you that many herbal and OTC “natural” remedies are being sold over-the-counter and touted as completely safe, but one thing that MUST be stressed is that a drug is a drug – REGARDLESS of whether it is a naturally occurring drug or one made in a lab. An adverse effect like interfering with clotting is most definitely an “adverse effect” and should be listed as such. While searching for “Pau d’Arco” returned – not surprisingly due to the very commercial bias of the Internet – glowing testimonials on its use from websites selling it, adding the word “bleeding” to the search returned FAR different results – with warnings on this clearly labeled “adverse effect” from legitimate websites including informative articles from Memorial Sloan Kettering Cancer Center, and Drugs.com. Each of these links show risk of bleeding as well as other adverse effects like “Nausea, vomiting, urine discoloration” and “animal studies reported anemia, and reproductive and chromosomal abnormalities.” (From the MSKCC article, under “Side Effects”)

We followed our vet’s advice and did not use this substance. Neither the seller or company was willing to make up for the purchase. The seller would have issued a refund but shipping the product back would have cost nearly as much as the cost of the item. The manufacturer was in complete denial insisting the product was used by “lots of cockatiel breeders” without any problems. Lesson learned: just because something is published on a web page on the Internet does not mean it is accurate or true ESPECIALLY IF THE WEB PAGE IS PROMOTING SALES OF SAID SUBSTANCE.

If you are looking for information on bird care, please take the time to filter through the background noise of all the companies vying for your dollars. Most of the *best* and most accurate information is going to come from people who aren’t trying to make money by selling whatever they can to bird owners – whether it’s good for your birds or not. There are unscrupulous companies out there that will disseminate “information” that is really just an advertisement to convince you to buy things for your bird that may not be in the bird’s best interest. Look at all the websites that will offer things like toxic “bird protectors” that are really just mothballs in a can (active ingredient – paradichlorobenzen) – with instructions to COVER THE CAGE so your poor bird is forced to breath in CONCENTRATED toxic fumes! These sites will often claim they are just supplying a consumer demand (for a profit, of course) but anyone who truly knows about and cares about the health of birds would not sell a clearly hazardous and toxic product.

Another website purports to be a place for “expert” advice on parrots, yet the site also sells a concoction that is a witches brew of medicinal herbs – including wormwood – many of which are hepatotoxic or nephrotoxic or neurotoxic at high doses. What’s a high dose for a bird? No one knows, because as my vet says, there has been no safe dose established for many of these “homeopathic” remedies that really aren’t homeopathic nor a remedy at all. Here’s what Drugs.com has to say about wormwood: “Toxicology: Wormwood is classified as an unsafe herb by the Food and Drug Administration (FDA) because of the neurotoxic potential of thujone and its derivatives. The safety of wormwood is poorly documented despite its long history as a food additive. Convulsions, dermatitis, and renal failure have been documented.” Does this sound like something you want your bird to have?

Beware of those who claim to practice herbal medicine without any training. Herbs ARE drugs – just in non-standardized doses. Adverse effects are absolutely a risk of taking an herbal supplement. St. John’s Wort has produced documented cases of a life-threatening rise in serotonin levels, called serotonin syndrome, when taken with a “SSRI” (Selective Serotonin Reuptake Inhibitor – a class of prescription anti-depression medications). Taken by itself, at high enough doses, it can have the same effect. It has a mechanism of action that is nearly identical to pharmaceutical SSRIs and is actually widely prescribed for depression in Germany. Just because something is “natural” and not made in a factory does NOT mean it cannot have adverse effects. We recommend you ALWAYS consult an AVIAN vet before administering ANY herbal product to your bird. If your vet is unfamiliar with herbal medication, find one who is.

It’s truly a world of buyer beware and when it comes to your bird’s health, you must be extra-cautious about filtering through the greed-motivated offerings to find the best value in both savings and SAFETY for your little feathered one!

This site uses Akismet to reduce spam. Learn how your comment data is processed.